Lion Cubs – Growing up in the wild | Blog There has been great excitement out on the reserve with the newest additions of lion cubs. Guests have been enjoying fantastic sightings of the cubs and they are by far stealing everyone’s hearts. While the lion cubs are cute and cuddly and are preoccupied with playing with their siblings and drinking milk, it is a tough world that they have to grow up in. It’s not all fun and games out in the wild. Growing up in the wild is tough so lion cubs have many lessons to learn before they reach adulthood.

When it is time to give birth, a lioness leaves her pride and will give birth to her cubs in a thick, dense bush. The cubs are born completely helpless so the mother will keep the cubs hidden from other animals, including her own pride. When the cubs are born, their eyes are closed and will only open when they are between 3 and 11 days old. Cubs are born underdeveloped at birth so the mother will keep them hidden until they are strong enough to meet the rest of the pride. The reason for the cubs being undeveloped at birth is because female lions have an incredibly short gestation period of 110 days. Females need to hunt to survive and to provide for their pride so they would be disadvantaged if they were weighed down by a heavy, pregnant belly for a long period. Each cub can weigh roughly 1,5 kilograms at birth (Approximately 3,3 pounds). It’s hard to believe that such a tiny cub will grow into one of the most feared predators in the animal kingdom. Females can give birth to up to six cubs at a time however, litters of 2 or 3 cubs are more common.

From time to time, females will move their cubs to a new den site. To do this, the female will use her mouth to pick up the cubs by the scruff of their neck. The lion cub will instinctively relax its muscles to allow the mother to move it. It is crazy to think that the same powerful mouth which is used to suffocate prey is used ever so gently to move her cubs. It is fascinating how nature works! After approximately six weeks, the mother will introduce her cubs to the rest of the pride. 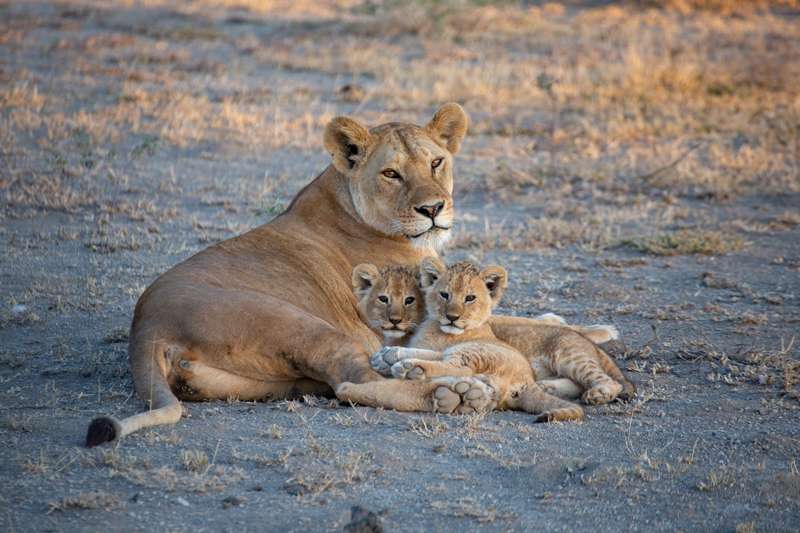 Lionesses often synchronise their breeding. This is useful as all the mothers will then mutually nurse each other‘s cubs.  This also helps each lioness as they are ensuring their own offspring’s success by helping to raise other lionesses cubs. However, if there are very new cubs in a pride as well as cubs who are 3 months and older, the mother of the younger cubs will keep her offspring away from the pride for longer than the usual six weeks. This is because the older cubs are stronger and have easier access to the milk on offer.

Between the ages of 6 and 10 months, the cubs are weaned from their mother’s milk. The cubs are still dependent on their mothers for their food as they will feed off prey killed by their mother or other pride members. Male lions generally do not play a role when it comes to raising cubs. Females are therefore responsible for teaching cubs how to hunt. Learning how to hunt is one of the most important skills that cubs will ever acquire. In the early days, hunting is a combination of play, instinct and observation. Lionesses will take care of their cubs until they reach the age of two or three. The mother will then go through estrus (her heat cycle) and carry another litter of cubs. The pride will then force out the male cubs who will either take over a pride from an ageing or sick male or they will start their own pride with females of a similar age. This may seem on the cruel side however, it is a crucial part of eliminating competition. This also prevents inbreeding in the pride. Female adolescent cubs will either become part of the maternal pride or form a new pride with other female adolescents.

Lion cubs are full of life and spend most of their day playing with their sibling or with other cubs in the pride. They will stalk and wrestle with each other, and while this may seem adorable to watch, it is vital for them to develop these skills which they will use later in their life when they start to hunt for themselves. This type of play also builds family bonds with other cubs in the pride.

In search of more reading? Here’s more information on the lion!