September is Tourism Month in South Africa – a month dedicated to focusing on the importance of tourism to the South African economy. Tourism Month coincides with Heritage Month which recognizes aspects of South African culture which are both tangible and intangible, historical inheritance and food. In South Africa, we are privileged to have so many protected areas where we can admire Mother Nature’s beauty as it has been for thousands of years. To celebrate and to remind us of this natural wealth that belongs to us all. South Africa’s National Symbols are rich in heritage and tell the stories of the country’s abundant natural and cultural history. Part one of our Heritage Month celebration will feature our National Symbols.

The National Bird – The Blue Crane

There are cranes all over the world however the Blue Crane is only found in Southern Africa. This tall, dignified bird loves open, dry grasslands. Their diet is predominantly plant-based however they are omnivorous. They have a varied diet consisting of plant material such as bulbs, seeds and roots and animals such as insects, small reptiles, frogs and small mammals. Blue Cranes stand about 110 – 120 centimetres in height (approximately 43 – 47 inches) and weigh about 4.5 – 5.1 kilograms (approximately 4,5 – 11,2 pounds). Their wingspan is 180 – 210 centimetres (approximately 70 – 82 inches).

The Blue Crane is a symbol of bravery. When a Blue Crane feels threatened, it puffs up its head a performs an aggressive dance and hisses like a snake. The Blue Crane features in many stories told by the Xhosa speaking people of South Africa where it was a tradition to award Blue Crane feathers to outstanding warriors who were considered brave servants of the nation.

Interesting fact: The Blue Crane is featured on some of South Africa’s stamps and coins. The National Animal – The Springbok

The Springbok (Afrikaans: “Spring” meaning “Jump’’ & ‘’Bok’’ meaning “Antelope”’) is a small brown and white gazelle that stands about 75 centimetres high (approximately 29 inches). Males can weigh up to 50 kilograms (110 pounds) while females weigh up to 37 kilograms (81 pounds). The species is known for its pronking and graceful leaps in the air (jumping display) which led to its common name. Springbok feed on grass and leaves and are mainly found in the drier parts of South Africa namely the Free State, Karoo and North West, where they can survive for long periods without water. Both the males and females have horns however the males are thicker.

Interesting fact: Our South African Rugby team are known as “The Springboks” as the antelope is seen as a symbol of agility, confidence and endurance. The National Tree – The Yellowwood Tree

Yellowwood Trees are hardwood trees and have been part of the South African landscape for more than a hundred million years. The species is widespread and is found from Table Mountain in the Western Cape, along the southern and eastern Cape Coast, in the ravines of the Drakensberg and up to the Limpopo Province. They can grow up to 40 meters (approximately 147 feet) in height with the base of the trunk up to 3 meters (approximately 9 feet) in diameter. These trees are slow-growing, and this makes their honey-coloured wood strong and heavy. The tree is protected in South Africa because in the past, they were sought-after as timber trees and almost became extinct in some areas. Yellowwood furniture commands high prices today because of its rarity.

Interesting fact: The Big Tree – a tourist attraction situated along the Garden Route of South Africa is an eight hundred-year-old Yellowwood Tree. The tree stands 36.6 metres (120 feet) high and has a circumference of about 9 meters (approximately 29 feet). You will also find several Yellowwood Trees on Lalibela! Interesting fact: “Galjoen” is the Dutch word for “Galleon” a type of large sailboat that was designed to be a cargo ship with lots of cannons for protection. During the 1600s there were several wars between the Kingdom of England and the Dutch and were known as the Anglo-Dutch Wars where civilian galleons were converted into warships. The Cape Colony was founded right at the beginning of the First Anglo-Dutch War so early European settlers in the Cape would have had galleons on their mind when they started fishing the waters of the Cape. 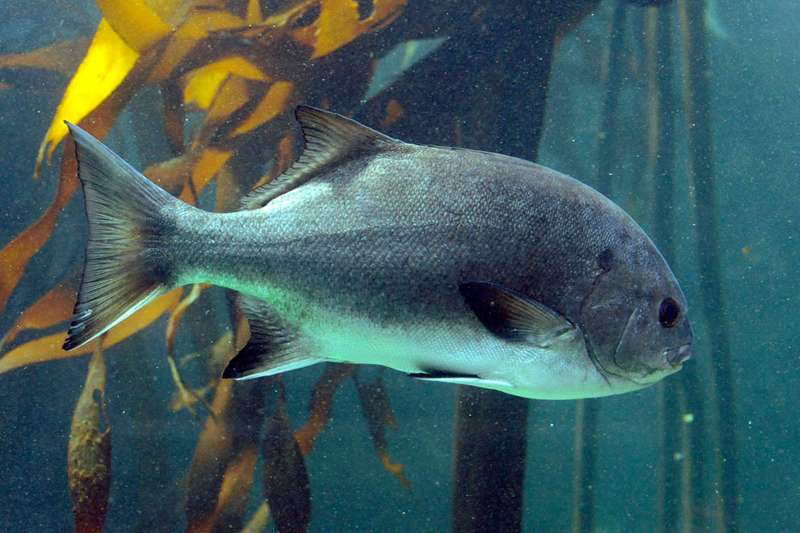 The National Flower: The King Protea

The King Protea (Protea Cynaroides) is a woody shrub with thick stems and large dark green, glossy leaves. Most plants are one meter in height (approximately 3 feet) when mature, but may vary according to locality and habitat. The flowerheads vary in size from about 120 millimetres to 300 millimetres in diameter (4.7 – 11.8 inches). Nectar feeding birds such as Sugarbirds and Sunbirds pollinate the flowers as they feed on flowers. The King Protea grows in fire-prone vegetation where natural fires occur every 10 – 30 years. The plant can survive a fire because of its thick underground stem, known as a lignotuber which contains many dormant buds. These buds will produce new growth after the fire. The King Protea is found in the southern areas of the Western Cape up to just east of Grahamstown in the Eastern Cape (which is not too far from Lalibela Game Reserve).

Interesting fact: The South African cricket team are named after this beautiful flower and are known as “The Proteas”. How many of these National Symbols have you been fortunate to see during your visit across South Africa?

In search of more reading? Here’s some recipes to celebrate Heritage Day!